Growth hormones are making headlines these days both as a performance enhancing substance and as anti aging supplements. While I believe it is true that it is a valuable tool to combat the aging process, it is very much misunderstood.

Antiaging and HGH (human growth hormone) go hand in hand. The technical term for this is Somatotropin and it is what is called a polypeptide hormone, which is secreted, by a part of the brain called the anterior pituitary.

It is produced at various times during the day and night in pulses. The most significant amount is produced at night during the sleep cycle in REM sleep. This is why interrupted sleep will often make you feel tired and fatigued, because the surge of HGH did not occur. 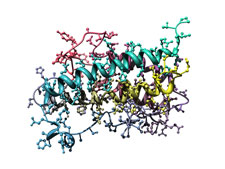 These peaks of HGH last from 10 to 30 minutes and occur from 8 to 5 times per day depending on your age. Young adults have the highest levels and as you get older, both the levels and frequency of peaks decline. This corresponds with an overall decline in health as well.

What Does it Do?

HGH influences the anabolic processes of your body and is responsible for the stimulation of insulin like growth factor also known as IGF-1 or Somatomedin-C. It causes cell division resulting in formation of new cartilage, and affects the health of your thymus gland, which regulates your immune system. This is why antiaging and HGH are connected, and how it got its reputation as an antiaging hormone.

GH is most important in the growth cycle of young adults (puberty) during which most linear growth (height) occurs. This is due to the effect of HGH on the growth plates of bone. In cases of deficiency it is given to help children successfully attain their natural height.

Levels of HGH are measured by the administration of blood tests, however there may soon be an accurate saliva test for measuring GH levels. There are several outward signs that point to a deficiency of HGH.

Excess GH most often results from a pituitary tumor and is characterized by abnormally large and misshapen joints. The

bones of the toes, fingers, and jaw grow abnormally thick. There may also be problems with muscle weakness and insulin resistance. The treatment usually consists of removal of the tumor or using some compound to block the excess GH production.


With all these potential problems the use of HGH as an antiaging hormone is still a good and safe undertaking, because the precision with which it is administered is designed to avoid the problems associated with excessively high levels of growth hormones.