Raw Milk - Is it Healthier Than Pasteurized Milk?

Raw milk is one of natures most perfect foods. Organic milk that has been pasteurized is a distant second. Milk nutrition facts confirm that all foods, including dairy, should be consumed as close to their natural state as possible 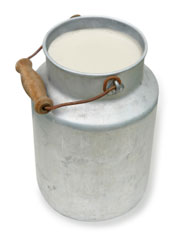 Should You Drink Milk?

You have no doubt heard dairy products being knocked nutritionally as being unhealthy for you to consume. There is some truth to this, but it is a bit more complex than saying that milk or other dairy products should be avoided.

The health consequences of drinking milk depend of the source, quality, and processing of the milk, along with any lactose intolerance you may have. Accurate milk nutrition facts need to be taken into consideration when deciding whether to drink milk or not.


Drinking raw milk that is also organic is where you should begin. This is milk as close to it’s natural state as possible. It avoids many of the problems inherent in pasteurized milk and would make milk drinking a lot safer and healthier for more people.

Organic milk also avoids the bovine growth hormones and antibiotics that are generally used on dairy cows, and that can cause problems in human consumption, despite the denials of the USDA and dairy industry.

Here are the main issues you should be concerned about regarding the drinking of milk:

Let’s examine the issue of pasteurization and try to make sense out of the often confusing and contradictory milk nutrition facts given to the public about milk and other dairy products.

For purposes of clarity, lets qualify the three terms relevant to the processing or lack thereof of milk.

I will explain to you why each of these issues affects the nutritional quality of the milk you drink, and why your health is worth your attention to these milk-processing issues.

Please remember that unpasturized milk does carry with it a degree of risk from bacterial contamination however slight. The decision to purchase and consume it should be undertaken with full knowledge of the risk as well as the benefits of drinking raw milk.

The Downside of Pasteurization

Pasteurization of milk began in the late 1800’s due to problems with bacteria transmitted in milk. The unsanitary conditions under which raw milk was produced were not addressed; rather pasteurization provided an easy solution to the problem of milk borne bacteria in mass-produced milk, which was of poor quality.

Instead of cleaning up the dairy industry, which during this time had many problems with poor sanitation, feeding cows poor quality foods, and raising them in terrible conditions, the industry adopted pasteurization as the method to kill harmful bacteria in poor quality milk. Today, even organic milk is pasteurized resulting in the loss of nutritional quality. 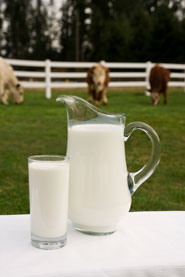 The pasteurization process involves heating the milk to a certain temperature for a short period of time to kill bacteria. The longer this heating process and the higher the temperature, the more the quality of the milk is destroyed.

Many people in modern societies are said to be lactose intolerant and therefore unable to digest milk properly. Lactose is a milk sugar that requires the enzyme lactase to break down disaccharides in milk into glucose and galactose, which can then be digested.

The milk nutrition facts are that heat Pasteurization destroys beneficial bacteria, and enzymes in milk including lactase which otherwise aids in the digestion of milk. Thus many people who drink pasteurized milk devoid of lactase have problem digesting it, however this is not the case with raw milk!

The process of homogenization involves squeezing the fat globules through a filter under high pressure. This breaks up the fat globules and it has been theorized also increases the amount of xanthine oxidase that reaches your blood stream.

Xanthine oxidase is a very reactive enzyme and early research pointed to the possibility that this enzyme was instrumental in causing damage to artery walls that characterizes heart disease.

Although the research has not been able to definitively link xanthine oxidase to heart disease, the available evidence does seem to warrant concern over the effects of homogenization on both regular and organic milk. 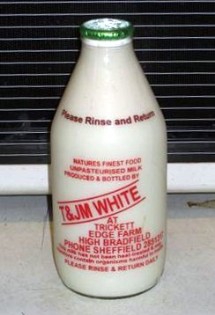 Raw milk is inherently healthier and more beneficial than milk that has been processed. Fats are very delicate structures and prone to damage by all kinds of processing. In light of this it would be best to avoid milk that has undergone this kind of processing.

Simply put, organic milk is that which is produced in certified organic dairy farms. Most of the time this milk is both homogenized and pasteurized by the time it reaches your store shelf.

The label organic is used as a selling point to make you think you are getting something wholesome and natural. While there are benefits to milk that is produced organically, these are negated by further processing like pasteurization and homogenization.

The standards and definitions concerning organic dairy farming are still being debated and fought over. However milk nutrition facts clearly suggest that milk in its unprocessed state is a better quality food, than its heavily processed counterpart.

What to Look For and Where

If you are able to purchase certified raw milk, in the area where you live, you can be assured that:

Where to Buy Real Milk….

The quality of all the foods you eat is directly proportional to the amount of processing they have undergone and milk is no exception. The dairy industry is still struggling with standards of organic farming, however from a nutritional point of view, raw milk purchased from a certified organic dairy farm is the best way to consume it.

The Benefits of Honey - Raw Honey is Nature's Medicine