Normal Blood Sugar Levels and Their Importance for Healthy Aging

Normal blood sugar levels, are the key to antiaging. Among the causes of aging, high insulin levels are THE BIGGEST THREAT to the length and quality of your life

The famous Baltimore Longitudinal Study of Aging produced statistics, which indicated that three factors were common to longevity in the people being studied.

The people being studied were not on calorie-restricted diets and yet displayed effects similar to caloric restriction on the aging process. 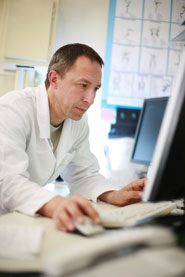 There also seems to be an inverse relationship between insulin and DHEA such that when insulin is low DHEA levels are higher, which again correlates with longer lifespan.

Researchers now theorize that maintaining normal blood sugar levels, mainly through diet and some exercise, could duplicate the antiaging benefits of caloric restriction.

The normal range is a fasting blood sugar level of between: 70-110mg/dl taken upon arising in the morning, after a good night’s sleep as interrupted sleep or lack of sound sleep can cause blood sugar levels to be elevated.

Insulin is a hormone secreted by the your pancreas in response to increases in blood glucose levels. It is a transporter hormone that moves glucose from the bloodstream into muscle tissue to be used as fuel, thus promoting normal blood sugar levels.

Normal blood sugar levels will spike up after a meal depending on how glycemic the meal is. However it should still stay within the 120-mg/dl range. Higher spikes indicate either a diabetic condition, consumption of far too much sugar in the meal, or both.

There are cell receptor sites for the insulin molecule in many tissues of the body. When insulin is chronically high as in type 1 diabetics who take insulin by injection, or even in non-insulin dependent diabetics and others who consume to many high glycemic carbohydrates, these many tissues are exposed to the growth promoting effects of insulin.

You may be wondering why this is bad, because after all isn’t insulin essential to life? The answer is yes, BUT in the right amounts and at the right times.

Insulin is like fire, it is necessary and useful, but when out of control can be very damaging!

Insulin is a growth-promoting hormone, which has negative effects on cellular processes, which can lead to cancer. This is another reason why high insulin levels are one of the most significant causes of aging.

Scientists have recently found that insulin both regulates its own production, and also regulates tissue aging. Unlike other key anabolic hormones in the body that decrease with age, insulin increases due to loss of receptor sensitivity in the tissues.

The loss of insulin sensitivity by the body’s tissues compounds these problems because it requires the pancreas to secrete more insulin contributing to a cycle of overproduction and even greater loss of sensitivity that can result in a person becoming diabetic.

This effect called “insulin resistance” makes maintaining normal blood sugar levels increasingly difficult with time and advancing age. Many people who haven’t been diagnosed as diabetics are unaware they have a problem until symptoms begin to appear.

Chronically high insulin levels result in what I like to call “hormonal signaling static.” This refers to the fact that constant elevations in blood sugar and the resulting surges in insulin cause the body’s hormonal signaling mechanisms to be constantly disrupted.

Disruptions in this hormonal signaling can result in a hormonal system that is not functioning properly, kind of like a car engine out of tune. Since proper hormonal balance is essential for normal healthy aging, this can cause accelerated aging and chronic health problems in various body systems. It is one of the most significant causes of aging in your body.

Strategies to maintain normal blood sugar levels would center on a low glycemic diet optimized for your blood and metabolic type, brief intense exercise, and nutritional supplements that have beneficial effects on keeping blood sugar in the low normal range.

Steps that you should take would be the following:

More information on maintaining normal blood sugar levels and avoiding high insulin levels can be found on my page about controlling diabetes.

Toward a Longer Better Life

You now have the key to a longer healthier life because we now know that insulin is perhaps the most important hormone in the body when it comes to how you age and how long you live.

High insulin levels caused by a high glycemic refined carbohydrate diet are one of the primary causes of aging and poor health. All you need to do is to exercise regularly and adopt a low glycemic and nutrient dense diet to maintain normal blood sugar levels.