Antiaging research is just beginning to be taken seriously by the scientific community. Part of the reason for this is that many scientists seriously disagree over whether true antiaging is actually possible, and so life extension studies continue in controversy.


Organizations like the A4M (American Academy of Anti Aging Medicine) are 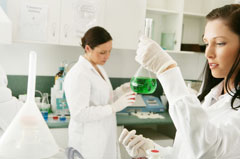 leading the way in antiaging research and its near term practical applications to your health and well being.

Some researchers believe that symptoms of normal human aging can be alleviated or made more tolerable, but that aging itself cannot be slowed, much less stopped or reversed. Others are certain that it can, and that science will find the secret of longevity.

If this seems strange, just bear in mind that scientists are often constrained by rigid thinking thus new ideas have an uphill battle for acceptance. I believe that antiaging interventions are scientifically valid, and that research actually bears this out.

From the caloric restriction experiments of Dr. Roy Walford, to research into stem-cells , it seems at least plausible that aging could one day be treated successfully like any other medical condition.

One of the problems with antiaging research is that scientists tend to specialize on very specific areas of study and often are not able to see the big picture so to speak. Often time’s real breakthroughs come from people outside the scientific mainstream.

These people have expertise in multiple areas of science and are able to draw insights from various disciplines and relate them in a way that many others cannot. The scientific generalist has a clearer picture of what research shows about the secret of longevity.

I have been interested in antiaging and life extension ever since I read Durk Pearson and Sandy Shaw’s groundbreaking book “Life Extension” in 1983. Their life extension studies convinced me that living the right way could counteract the aging process.

Another scientist that has influenced my own thinking about antiaging is Dr. Geoffrey Grant. His theories called “DOLE” (decline of life energy) revolve around declining cellular energy and his proposed remedies through nutraceuticals.

I gravitate toward the research of those scientists who offer a hopeful and proactive approach to antiaging research. Thus the researchers I mention on my page are people who believe in antiaging and offer steps we can take toward making it a reality in our own lives.


An Ongoing Search For Information

I will be providing more information about the present scientific theories on aging . I will also try to give you an overview of life extension studies that makes sense in non-scientific terms. The information on this site is focused on helping you understand aging better and being able to slow down or even reverse some of the symptoms.

I will be suggesting books for further reading, for those of you who like to delve into the science of antiaging. Often it is easier to get motivated to apply the secrets of longevity to your life when you know why they are so important.

I will also include somewhere on site some references to life extension studies which will underscore the main points in my antiaging guide. I believe that although all the scientific evidence is not yet in, the antiaging research I have seen thus far proves that the concept of successful antiaging strategies is achievable by each and every one of us.


Return from Antiaging Research to the Home Page