Adaptogens - for Wellness and Antiaging

Adaptogens are herbs that can increase your body’s resistance to various forms of stress, anxiety, and fatigue. An adaptogen is a remedy herbal that has a normalizing effect on physiology, and adaptogenic herbs are known for their restorative properties.

Though their use goes back many centuries, it was a Russian scientist named Nikolai Lazarev who in 1947 first coined the term adaptogen, and studied herbs with specific stress modulating properties.

Lazarev, working with native populations, found that the herbs such as rosea rhodiola were seemingly able to fortify the body against the effects of stress, and help balance the physiology of workers, in demanding environments and conditions.

The Russian military also made use of these valuable herbs upon finding that they allowed their soldiers to better withstand cold and fatigue, and to keep going through all kinds of adverse environmental conditions.

Adaptogens can accomplish this by rebalancing the hormonal and immune systems in the way that is most appropriate. What makes adaptogenic herbs so unique is that no matter how the stress affects or changes your body’s physiology they bring it back to into a normal and healthy balance. 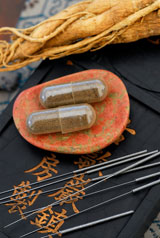 Dr. Israel I. Brekhman PhD is considered to have been the world’s foremost authority on the adaptogen. He spent many years studying and cataloguing their effects. Dr. Brekhman’s work was so revered in his native Russia, that he was given the “Order of Lenin” award by the Russian government.

For herbs to be considered adaptogenic:

Scientists are not quite sure just how they elicit this stress response adaptation. They have been used in folk remedies for centuries and their unique properties as a class of botanical substances have added to the mystique they have as natural medicines.

These herbs used extensively in Russia were largely unknown in the west especially the U.S. The world first began to be aware of their qualities when they were used with great success by Russian athletes.

Adaptogenic herbs were so effective the Russian athletes were suspected of using performance-enhancing drugs, which they may well have done, but the adaptogens played a strong role in reducing the stress of intense athletic training.

The end result was much better performance from these athletes and for the first time a growing interest from western sports trainers and coaches. Since the Russian training system emphasizes restoration and recovery from intense training, adaptogenic herbs were vital to the preparation of their elite athletes.

Here are the most popular and commonly used adaptogens:

This short list is merely an overview. You need to read a good book on this topic for more detailed information regarding combinations of herbs, specific recommendations and dosage guidelines.

Cancer and the Adaptogen

The most impressive use of an adaptogens I am aware of is the case of Adrianne Blewitt. A young Olympic prospect in the shot put who was diagnosed with Hodgkin’s Lymphoma. She was put on a regimen of herbs by Charles Poliquin, continued training and gained 11 lbs of muscle while undergoing chemotherapy!

Several adaptogenic herbs not only inhibit cancers, but can also protect the body from the side effects of toxic anti cancer therapies, such as radiation or chemotherapy. These herbs act in various ways to combat the effects of cancer and its treatments.

The bottom line is that these herbs help prevent cancers from developing, and help you cope with cancer treatment by strengthening and supporting the body’s systems while undergoing treatment.

From what I have written about these herbs I think you can understand why they are a wonderful fit for your antiaging program. In my personal experience, I have used them on my

86-year-old father with great success. More than once they have helped him overcome the effects of emotional stress and illness, and remain remarkably healthy for a man of his age!

Whether you are an elite athlete, weekend warrior, just a normal healthy person, or someone who is going through a significant health challenge, I urge you to invest in a good book on this topic and make adaptogens a standard tool in your wellness and antiaging toolbox. Trust me, you will be more than glad you did.