Xylitol Benefits for Your Health


Xylitol benefits make it one of the best sugar substitutes. Benefits of xylitol are low calories, antibacterial activity, clean sweet taste, and it's glycemic index which is very low.

Xylitol is a sugar substitute that has properties that make it superior to other sweeteners like aspartame and sucralose. It was actually discovered in 1891 by a German chemist and later used during World War 2 due to shortages of sugar.


It is a naturally byproduct of glucose metabolism in plants, animals, humans, and even bacteria. Thus it is naturally present in our bodies, and is metabolized without insulin and the glycemic index of xylitol makes it safe for diabetics.

Xylitol looks and tastes very much like sugar, but without the negative health effects.

The benefits of xylitol make it a good choice for use in a number of food products.

It is used in cooking, baking or in sodas and soft drinks. It is also used in chewing gum, mint candies, mouthwash and even nasal sprays due to its antibacterial effects.

Please note that there are multiple sources for xylitol, one of which is corn. If you have issues with corn allergies or sensitivities (like me) then look for xylitol that is made from birch bark, to avoid advere reactions you might have to the corn derived product! 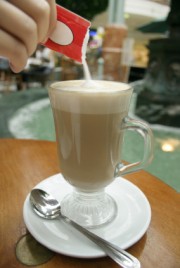 Although xylitol looks and tastes like sugar it does not have the negative health effects of sugar. Below are just some of the benefits of xylitol:

This sweetener is associated with two things that are critical to your long term health, your oral hygiene and blood sugar control. Bacteria in your teeth and gums are associated with increased risk of heart disease.

Poor blood sugar control is also associated with a number of health problems that can have serious consequences, sometimes referred to as metabolic syndrome. Because of the glycemic index of xylitol it minimizes insulin release when used as a sweetener.

Scientists have found in studies of laboratory animals that insulin levels are the biggest predictor of lifespan.

Lowering insulin levels by controlling blood sugar control is the most important factor in your antiaging efforts and xylitol benefits can help you do it.


This is one instance where something that seems too good to be true actually IS true!

You might want to check out this company's product called North American Xylitol as it is made from birch bark rather than corn.

Return From Xylitol Benefits to Longevity and Antiaging Secrets