Is there a longevity gene? Does family health history determine how long you can or will live? Can regulation of gene expression provide antiaging benefits? Lets clear away the confusion over these ideas and find out!


Before I delve into this, I want to make one thing clear from the start, and that is that I fervently believe that much of aging IS under your control. I would not be creating this website and putting so much energy into antiaging efforts if it were not.

There is a genetic component in aging. We know this from having mapped the human genome. Human beings are subject to a vast number of genetic based diseases and conditions. These health problems CAN cut short your life span, as can other problems that are NOT genetically based. However there is no “longevity gene” per se.

The important thing is not to get caught up in the idea that “there’s nothing you can do about it,” because some scientist has supposedly identified a “cancer gene” or an “Alzheimer's gene,” ect. There is much more to it than that, as you will see!

The term family health history is often used to suggest that health conditions are genetically based and thus one needs to be medicated for them, such as in the recent ads for a well known anti-cholesterol medication.

The marketing thrust of these ads is meant to suggest that family health history is destiny with regard to your personal health. While there are genetic tendencies that can be passed down from your parents and grandparents, you have great control over the regulation of gene expression.

What Is Gene Expression?

I will try to keep this simple. Gene expression is the process whereby the DNA encoding of a gene is made into a “functional gene product” such as a protein or RNA. There are several steps involved in gene expression:

Recent research at North Carolina State University has shown that environmental factors can be involved in the regulation of gene expression by turning certain genes on or off depending on such factors as geography or lifestyle. 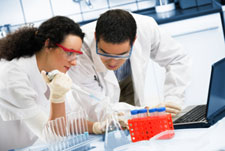 This new information suggests that environmental and lifestyle factors are likely more important than the concept of a longevity gene in determining how long we live and how healthy we remain into our advancing years.

Genes are turned on or off by proteins called “transcription factors.” These transcription factors are what control gene expression in response to a variety of factors including your environment, aging process, and family health history, among other things.

As an example, many adults cannot tolerate the milk sugar lactose, because the gene for making the enzyme lactase in their body has been turned off. Scientists don’t quite know why this happens but it results in many adults not being able to properly digest milk.

The argument over which is more important nature or nurture has been going on for many years. This is the classic question over whether a longevity gene or lifestyle controls your destiny with regard to health and lifespan.

The latest research however indicates this is not true and that you have a greater degree of control over the regulation of gene expression in your body than scientists previously thought. The argument over nature vs nurture is also driven by politics and money.

Logically drug companies would like to promote the idea that if you have “the gene” for a particular health problem such as cancer, or heart disease, diet and exercise will not be enough to keep you healthy, if you have a family health history of disease.

This is a clever marketing pitch for such things as statin drugs for cholesterol. The advertisements will suggest that if you have a “family health history of heart disease, you need to take drugs to control your cholesterol levels to lessen the chance of a heart attack.

Those in the medical and scientific establishment that have negative attitudes and ideas toward the antiaging movement promote the idea of a longevity gene which suggests that your lifespan is genetically pre-determined and antiaging is a waste of time and money.

The arguments over the importance of genes vs lifestyle aren’t likely to be resolved anytime soon. What is important is that you understand that based on the latest research, you can definitely affect the regulation of gene expression by diet and exercise.

All of the best research that we have indicates that your efforts at diet and exercise are very effective at preventing chronic illness and lengthening the span of healthy life. Drug companies want to make you believe otherwise, but don’t be mislead by their fear based marketing efforts.

Your family health history should be seen as just that…history, and not destiny! Don’t waste time and effort by worrying about whether you have the longevity gene. Focus on your antiaging efforts and you will be rewarded by a longer and healthier life.