Aging and disease seem to hit my family harder than most. Growing up, I remember my father telling me that the men in our family don't

I never met my grandfather, a dairy farmer, as he died from diabetes and colon cancer before I was born. When I was a teenager my uncle

also died prematurely possibly due to certain inherited genetic issues, thought much is still unclear about his passing.

Not long afterwards my father, then in his mid-fifties, was diagnosed with high blood pressure and cholesterol. He took a stress test and did extremely poorly. I remember him getting winded walking up just a couple of flights of stairs.

Afterwards he'd relax in front of the tv with some chips if he wasn't helping me with my homework. He was aware of the issues of aging and disease in our family history, and decided to do something about it.

The doctors prescribed Lipitor. Rather than rely on drugs to combat aging and disease, my dad decided to change his lifestyle. My mother started serving more fish and skinless chicken.

Beer at dinner was mostly replaced by milk or wine. More salads and less butter and salt were in our meals. Also he started jogging nearly every night.

It's now over a decade later and my dad looks great. He has lost weight, is healthy, and can run for many miles without much struggle. He is in his mid-60's, and I expect him to be around for many years to come do to his new lifestyle.

He also has gotten screenings for colon and prostate cancer and seems to be clear.

I've learned a lot from my dad over the years, and apparently aging and exercise are inversely linked. Exercise helps keep you healthy and avoid chronic disease.

My dad proved that aging and disease are positively influenced by diet and exercise. His choice to live a healthier lifestyle has only made me respect him more.

Join in and write your own page! It's easy to do. How? Simply click here to return to Aging and Disease.

Aging and Exercise and Me 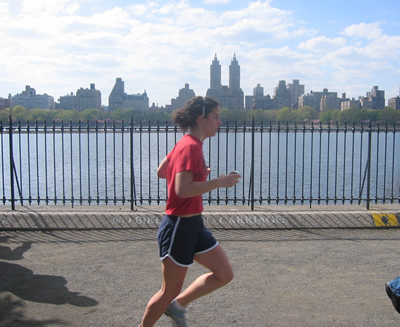 Me Running in Central Park

Aging and exercise are inversely related!

Aging happens to everybody, but in my particular family, aging and disease hit us pretty hard. We seem to have a family history of heart disease.

Because of this, I have always been very aware of my own mortality, especially now that I am getting slightly older.

I have decided to embrace a healthy lifestyle, stop eating junk food, start exercising regularly, and having done this over the last 5 years, I can really begin to see a difference.

I think that if my father or grandfather gotten the connection between aging and exercise and considered doing this, they might even be alive today.

Growing older is inevitable, but I believe that we can fight the effects of aging and disease with a healthy lifestyle.

Join in and write your own page! It's easy to do. How? Simply click here to return to Aging and Disease.