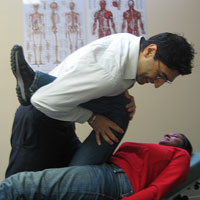 Below is my experience with Active Release Technique:

My occupation at the time kept me on a keyboard for eight hours a day. I began experiencing pain after about 4 months on the job. The pain started in my right wrist. I went to an orthopedic surgeon and he then sent me for an EMG test.

The results of that test confirmed a compression of the nerve and the diagnosis was carpal tunnel syndrome. I was then advised to try a couple of months of physical therapy. I tried this but it was of no help.

The pain kept getting worse and worse and I was finally forced to start using a brace. At this point I was advised that I could undergo arthroscopic surgery.

I was not offered any other solutions. I was operated on and then underwent more physical therapy to regain what I had just lost.

Several months later the pain came back with a vengeance. It got worse faster than before and as an added bonus, I developed it in the left wrist. I was sent to a different doctor who sent me for the EMG test again and an MRI of my wrists.

The tests showed no improvement on the right side post surgery, and now I developed nerve compression on the left.

At this point the doctor could only offer me more surgery. This time it would be an open cut and there were no guarantees as to its success.

At this point I figured that surgery did not fix it the first time, then there was no way I was going to do it again. So I lived with the severe pain.

I was then contacted by my insurance company, of all people, to see how I was. I informed them that I was once again in great pain only worse than before.

After some research, my agent suggested I try Active Release Techniques®. I was sent to a chiropractor, Dr. Criscuolo, for this treatment. When I first saw him I was wearing a brace on my right hand and close to wearing it on the left.

I then began a very intensive treatment that began at 3 times a week. Gradually, as I improved, the visits decreased to 2 times a week, then one, then none.

After the pain was just about gone, he sent me for a repeat MRI and EMG. The results this time showed a marked improvement. I went from a debilitating condition to an occasional annoyance.

If I use a mouse or keyboard I might have some discomfort once in a while, but it is something I can most definitely live with considering where I was when I made my first visit.

The only regret I have is that I was not made aware of Active Release Techniques when my condition first appeared. If I was made aware, I could have avoided surgery. My life would have been filled with much less pain.

If you think you have this condition, consult your doctor. Then inquire about Active Release Techniques®.

This technique works. I was a very severe case and it literally saved my life.